At last I can share with you this delicious recipe! It was scheduled for last week but things got a litlle bit messy and the recipe didn't come out as I expected...so after cursing a few times (you wouldn't like to see me angry when I have to throw around two cups of cashew cream in the trash), I decided to start all over again and try with a different version. Let me explain what happened these days.
My initial idea was to make vegan puff pastry for these millefeuilles and a cashew vanilla custard; the puff pastry tasted good but it wasn't puffy enough, actually it was a bit brittle so after all the mess that I caused in the kitchen (and tired from all the hand kneading) I ended up eating broken pieces of that unsuccessfully baked dough as a late afternoon snack. It tasted like some kind of bland cookie, but whatever. I think it is good to also share my culinary failures or those things that come out good but they are too average for my taste. Truth is that before you truly nail a new recipe you must try a few times and learn from your mistakes, until you get to make what you had in mind.
The other thing that didn't come out really good was the vanilla cashew custard, I took the recipe from Fran Costigan's 'Vegan Chocolate'; this is the first time that I get disappointed by a recipe from this cookbook, actually it's one of my favorites. I followed all the steps and did it all okay but the texture that you get from a cashew-based cream is not really smooth, not that delicious creaminess that one would expect from a typical vanilla pastry cream, it was also too thick. It might work as a filling for cookie sandwiches and some kind of pies but definitely not for millefeuilles, éclairs or other type of desserts that call for smooth creams.
So I spent the whole weekend investigating, browsing through some old cookbooks and finally created a vegan version of my family's favorite vanilla custard filling. I tweaked some quantities and infused the soy milk with lemon to create a refreshing and summery cream that pairs so well with raspberries! You must try this one, it really tastes super good!
As for the puff pastry dough, I won't give up, sooner or later I will make my own super puffy and healthy dough (fingers crossed!). But for this recipe I used ready-made dough, hope you can forgive me! And if you have a good recipe for vegan puff pastry to share with me it would be so awesome, I've done the buttery version before but I try to eat as healthy as possible and keep my inherited high cholesterol under control. 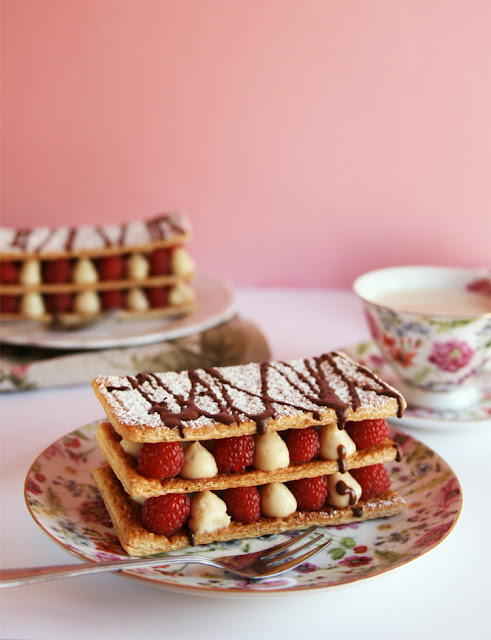 
Directions
- To make the vegan lemon pastry cream:
In a medium saucepan over low-medium heat stir together 2 cups of soy milk, sugar, vanilla extract, lemon and bring to a boil. Discard the lemon peel and set aside.
In a small mixing bowl stir together the cornstarch and the other 1/4 cup of soy milk, mix well. Pour the cornstarch mixture into the saucepan with infused milk and cook, over low heat, stirring constantly to prevent any curdling. Keep whisking (with a hand whisk) until the mixture thickens to a pudding-like consistency, it will take up to 5 minutes approximately.
Once the cream is thick remove from the heat immediately and stir in the margarine, it will melt in just a few seconds and will add a velvety and smooth finish to the cream.
Let it cool completely at room temperature, covering the surface of the cream with plastic wrap as this will prevent a skin from forming on the top.
Chill in the fridge until ready to use.
- To prepare the puff pastry dough:
Preheat oven to 200 ºC (392 ºF).
Roll out the dough over a piece of parchment paper and divide it into 12 equal rectangles (each millefeuille will have three layers). Poke holes with a fork all over the dough and transfer to a baking sheet by gently lifting the paper. Depending on the size of your store-bought puff pastry dough you will have some leftover rectangles. Cover with parchment paper.
Place a second baking sheet pressed over the top to keep the rectangles from puffing up.
Bake for 25 to 30 minutes, until golden brown.
To caramelize the pastry, sprinkle the top with confectioners sugar creating a thin layer over the baked pastry. Bake for a few minutes using the broil function until the sugar is melted.
Set aside to cool. 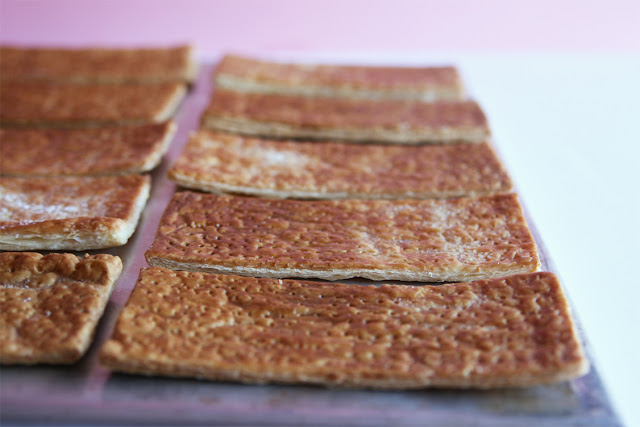 - To assemble the millefeuille:
Prepare a pastry bag with a round tip and fill with the lemon cream.
Place one layer of puff pastry on the serving plate, arrange the raspberries, pipe the cream in-between and in the centre; repeat the process again and place the third pastry layer. A classic millefeuille cake has three layers of pastry and two layers of cream.
Finally dust the top with confectioners sugar and a drizzle of dark chocolate.
Assemble the rest of the cakes following the method above.
Enjoy! 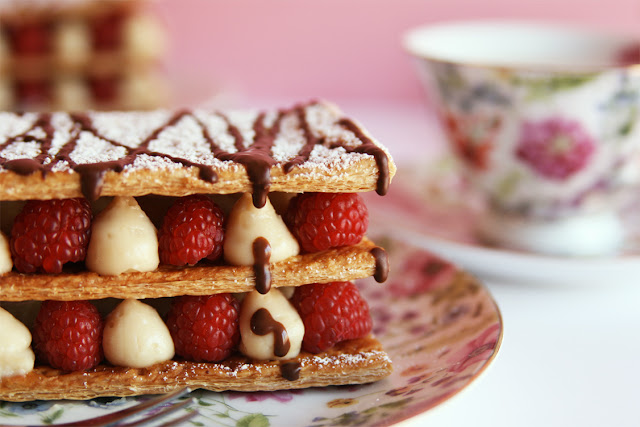 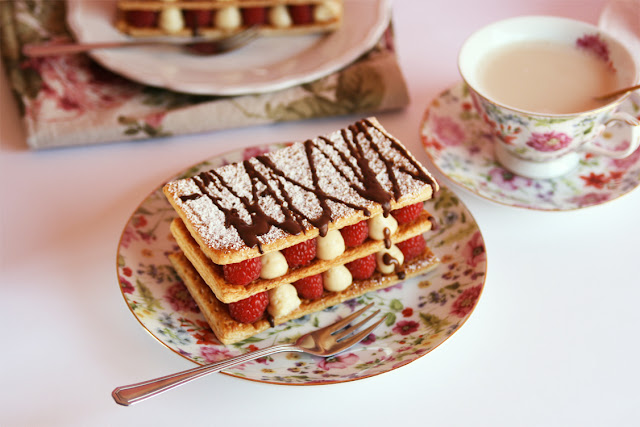 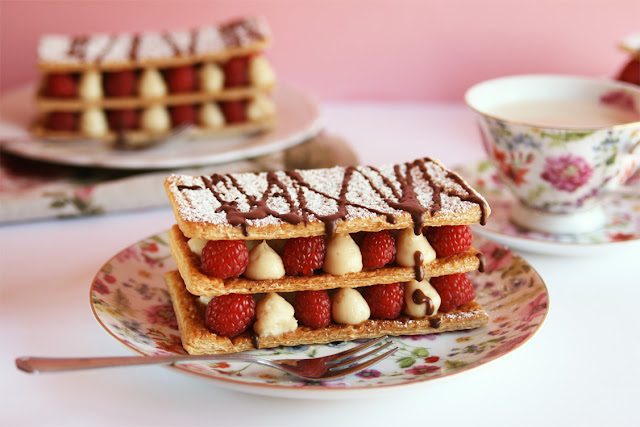 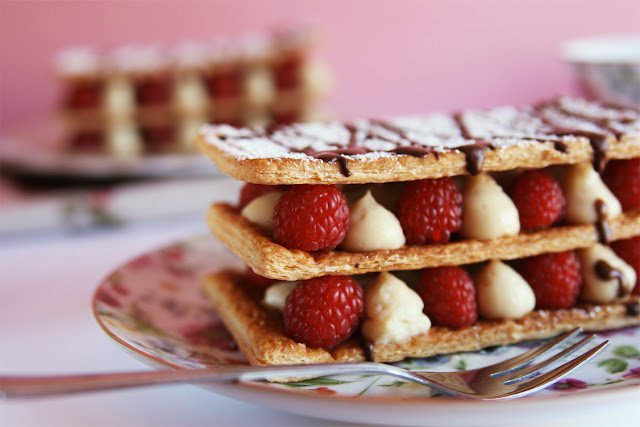 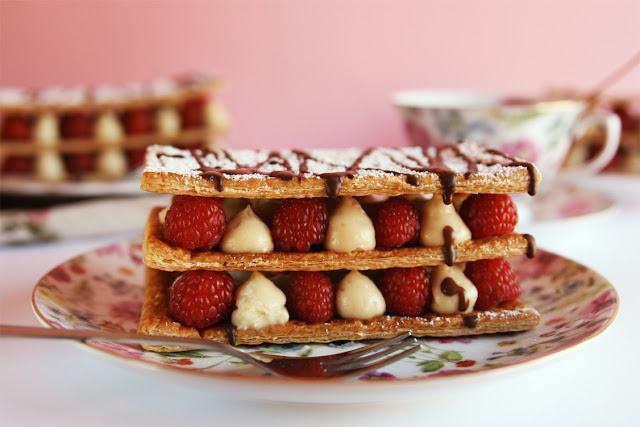