A new month begins, December, the last month of the year and probably the one when we spent more hours in the kitchen than usual. For good or bad, wether you feel that Christmas spirit or not, tis the season to bake and indulge…oh yes, and be merry and all those clichés. I'm not a big fan of Christmas but I can't say I hate it because it gives me the perfect excuse to pig out (well…relatively, I like to eat as healthy as possible even on this time of the year) and I love to bake for my loved ones, spend the afternoons wrapping presents and watch 80's movies at home, all cozy, full belly and wrapped in my blanket after a family gathering.
So want it or not, the craziness is about to start: shopping, cooking, shopping…and more cooking!
Maybe you've had enough pies for a while but we don't celebrate Thanksgiving in Spain so here I am with one more...PIE! But honestly, do we ever get tired of homemade pies? Hell no!
I'm already picturing myself nomming on this scrumptious Cashew Apple Pie these holidays or maybe waking up the first day of 2015 to the promise of (this) warm pie. One thing's for sure: I will make this recipe a lot of times in the near future! Cashew Cream and sweet Golden Delicious apples are such a great combo, a match made in heaven. The brown sugar gives a caramelized touch so the apple slices become very tender, juicy and simply luscious. It's not a simple apple-only filling, so this will definitely make your taste buds scream with joy.
Needles to say the smell around the house when this cutie is in the oven is SO GOOD!
Attention pie novices: don't be afraid to try this recipe, I'm not a pie master and this crust is easy (I promise) to make. Plus you won't need to go crazy trying to find non-hydrogenated shortening. It's made with olive oil, no butter, no margarine…this is pie crust science made easy and healthy! It tastes yummy (I love eating the toasty edges!), with a nice flaky texture a zillion times better than any store-bought crust and holds up great to a juicy filling. 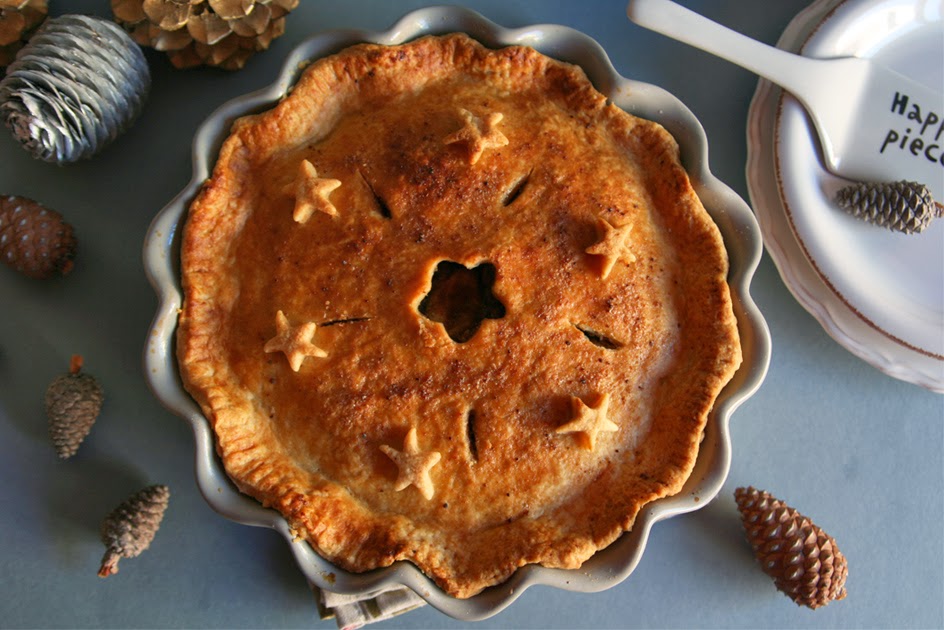 * I made the sweet variation of the Cashew Cream from my Chocolate Brownie Ice Cream recipe. Follow the same instructions but reduce the amount of maple syrup to 3 tablespoons and add 3 tablespoons of sugar. 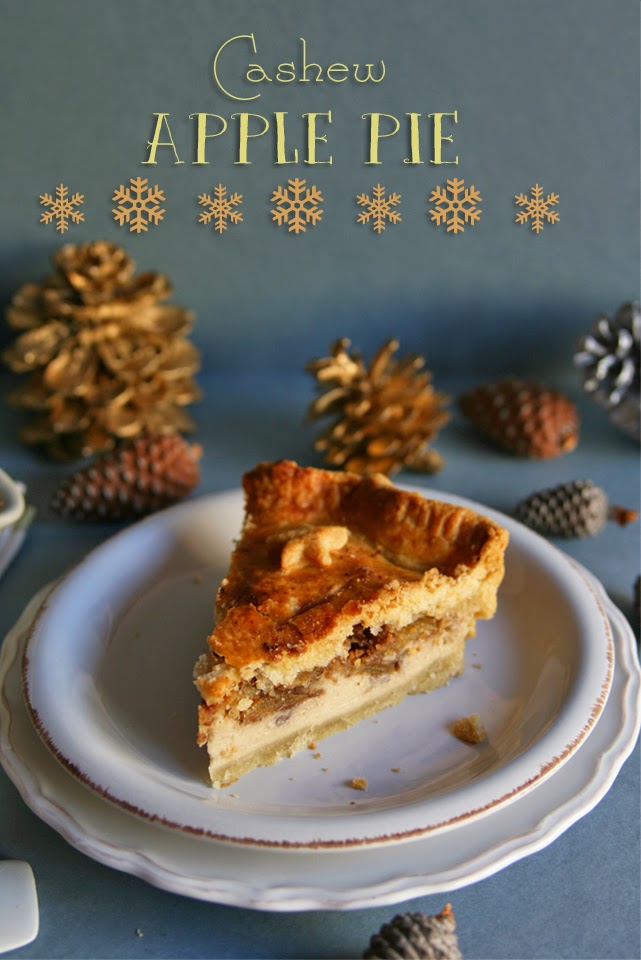 Directions
- Double Crust:
To make this crust (it's a double crust, that means you will have to divide the dough so you get the bottom and top) the first thing we need to do is to 'freeze' the olive oil. It doesn't need to be completely frozen and solid, if it looks opaque and has the consistency of thick cream then it's the moment to use it! Place the 1 cup of olive oil in a thin plastic container in the freezer about an hour before proceeding with the recipe. If the oil becomes too hard simply let it rest at room temperature for a few minutes.
In a large mixing bowl, sift together the flour and salt, give it a quick whisk to combine ingredients; use the hand whisk, forget about the stand mixer for this recipe cause your hands will be the best tool. So roll out your sleeves and get ready for some work!
Quickly add in the half-frozen olive oil by the tablespoonful, cutting it into the flour with your fingers until the flour looks pebbly.
In a small mixing bowl, stir together 6 tablespoons of ice water with apple cider vinegar. Drizzle 2 tablespoons of this mixture into the dough and stir using a rubber spatula. Add more water, a tablespoon at a time, until the dough holds together to form a soft ball, I usually add not more than 6 tablespoons of water. I like to end the kneading by hand but always being careful not to over-knead cause we could make the cold pieces of oil inside the dough melt (due to the warmth of our hands).
Divide the dough in two (the bottom crust should be a lil bit bigger than the top crust), roll each piece into a ball and flatten them into disks. Place a big piece of parchment paper or dust your working surface with flour and, using a rolling a pin, roll out each piece into a circle about 1/4 inch thick. To get a more uniform circle roll the pin several times in all directions by rotating the dough a few times. Repeat with the other half of the dough.
Lift the bottom crust into the pie plate, gently press the dough into the plate and smooth out any wrinkles around the edges from the overlapping dough. Refrigerate for 30 to 45 minutes both pieces of rolled dough before pouring in the filling.

- Cashew Apple filling:
Spread a generous layer of cashew cream into the bottom crust.
In a large mixing bowl combine the apple slices with the sugar, almond meal, flour, spices and salt, tossing with your hands to coat the apples. 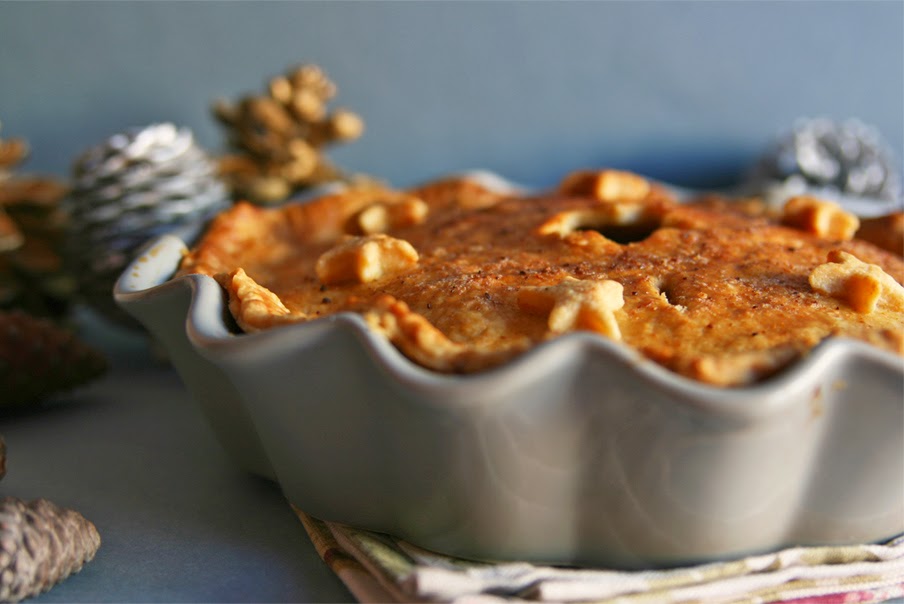 Preheat oven to 425ºF (218ºC). Add the filling to the prepared pie shell. Cover with the top crust, previously decorated with a star-shaped cut-in right in the middle, pinch the edges together, trim the excess dough and crimp. With the leftover dough we can make some extra decorations: roll it out again and cut out little stars (you can use the same size or a bigger cookie cutter).
Mix together the topping ingredients and lightly brush the top crust with nondairy milk. Place the little stars on top and sprinkle with the topping. Finally make five slits around the top to let steam escape.
Bake for 25 minutes, then lower the heat to 350ºF (180ºC) and bake for 30 to 35 minutes more.
Transfer to a cooling rack and let it cool before serving. 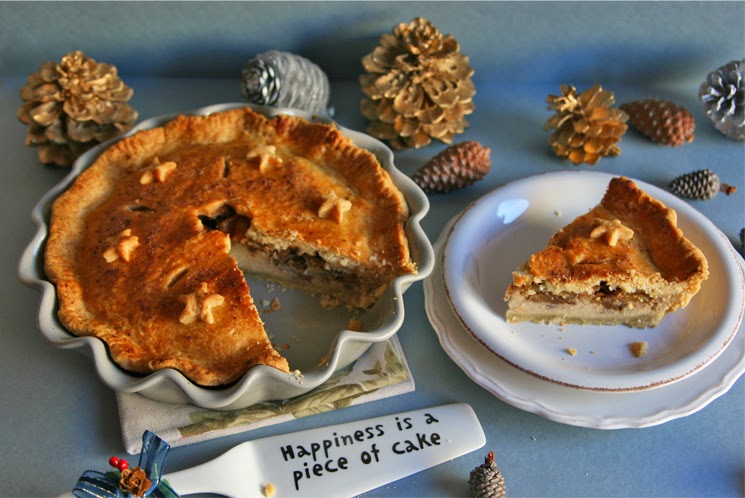 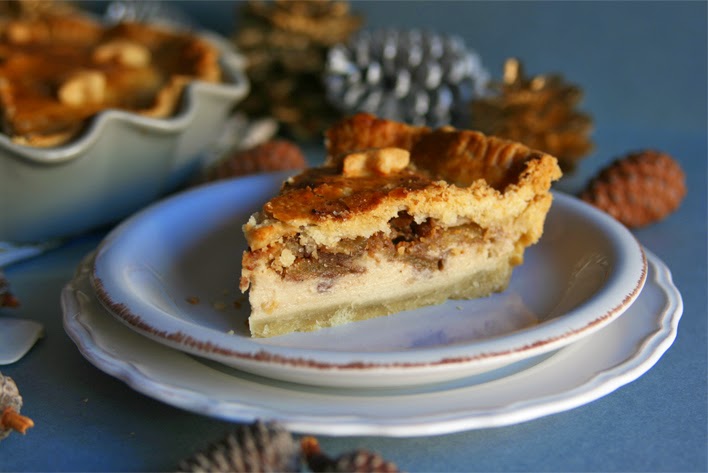 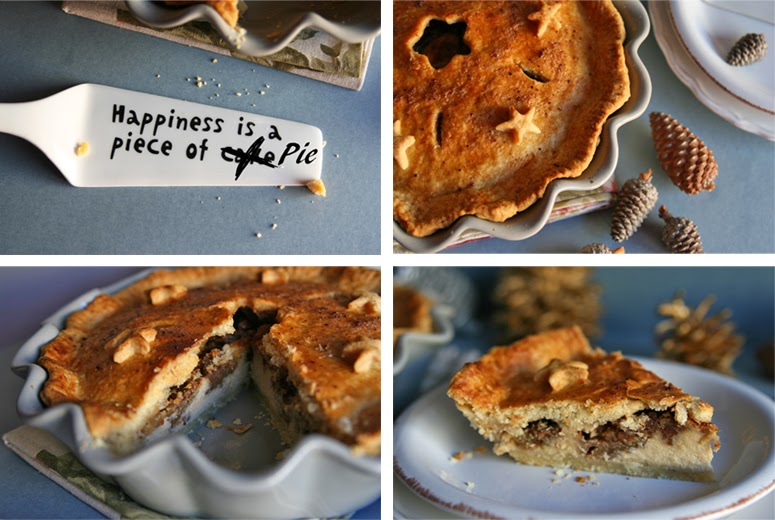 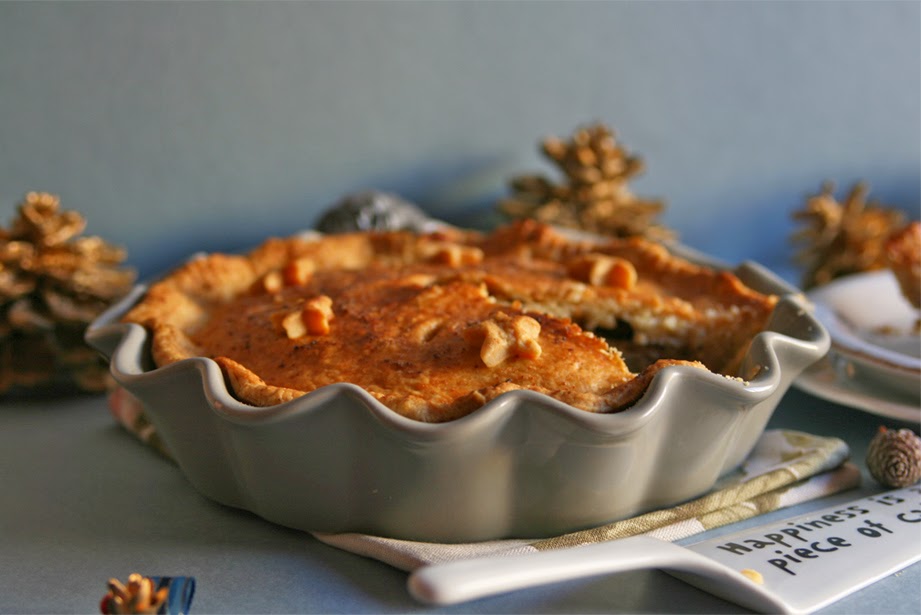