This is Halloween, everybody make a scene
Trick or treat till the neighbors gonna die of fright
It's our town, everybody scream
In this town of Halloween."

There couldn't be a better (and more appropiate) start to this post than the lyrics of 'This is Halloween' by Danny Elfman, from the soundtrack of one of my all time favorite movies: Tim Burton's The Nightmare Before Christmas.
This year marks the 20th anniversary of the film...wow, am I that old?! I feel like it was just a few years ago that I fell in love with Jack Skellington and all the Burtonesque world. To celebrate this special birthday and get into the Halloween spirit I bring you this week these cute and delicious cupcakes: Mini Pumpkin Cupcakes with Marshmallow Frosting.
Did you go pumpkin patch pickin'? Is your skeleton costume ready? Are you ready for a deadly dose of sweetness?
....trick or treat? ;-) 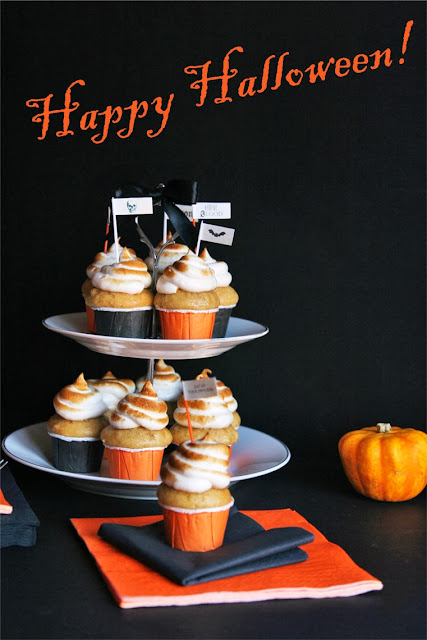 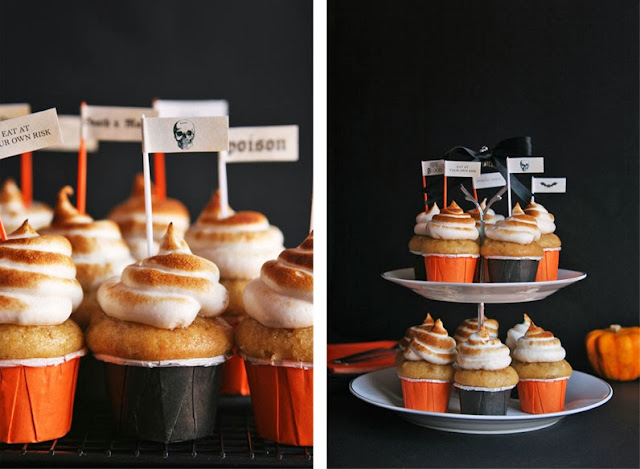 *The marshmallow recipe makes enough to generously frost 24 normal-size cupcakes, so keep in mind that if you are going to make them mini you'll have a lot of leftover frosting. You can use it to frost a different batch of cupcakes.

Directions
Preheat oven to 356ºF (180ºC).
In a large mixing bowl mix together all the dry ingredients (flour, sugar, baking soda, salt, cinnamon and baking powder). Cut the pumpkin into cubes and boil until tender. Strain out the water and set aside.
Puree the pumpkin in a food processor.
Chop walnuts into small chunks.
Add in the soy milk, pumpkin puree and oil to the dry ingredients mixture. Mix with your electric whisk/stand mixer. Fold in chopped walnuts.
Line a 24 mini-cupcake pan and fill with the mixture until half full.
Bake for around 20-25 minutes or until a toothpick inserted in the center comes out clean.
Set aside and let your cupcakes cool completely before using the frosting. 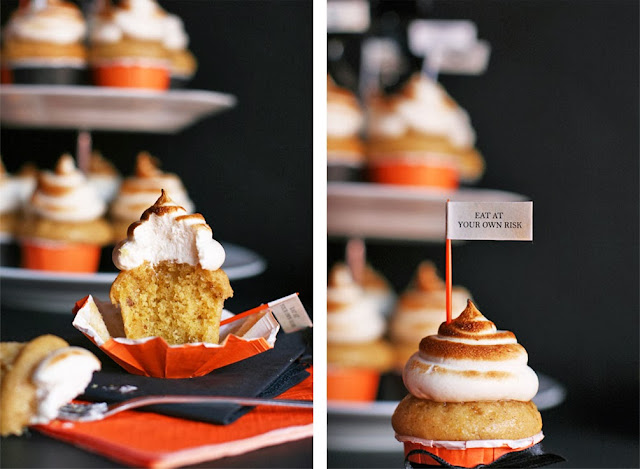 To make the marshmallow frosting:
This recipe is a bit tricky so don't get mad if you don't succeed at first. You will need a candy thermometer to control the temperature of the syrup during the whole process.
I would suggest you to use the cream of tartar with the egg whites to get more firm, shiny egg whites instead of adding it to the water/sugar mixture but I'm gonna give you the original recipe so you can make your own variations the next time you  want to make this frosting.
Combine the sugar, cream of tartar and water in a small saucepan. Place the pan over medium heat. Bring the mixture to a boil, cover* and cook for 2 minutes. Uncover the saucepan and continue to boil until the sugar syrup reaches the soft-ball stage, 242ºF (117ºC) on a candy thermometer.
*Covering in this manner allows the steam to wash down the sides of the pan, which will prevent any sugar crystals from forming.
While the syrup is heating to the desired temperature, combine the egg whites with the salt in the clean bowl of a stand mixer fitted with the whisk attachment and beat beginning at low speed and gradually increasing to medium-high speed. Beat the whites just until soft peaks form. Timing is crucial at this point in the game; if the syrup is close to reaching 242ºF, continue whipping the whites to firm peaks. If the syrup is not this warm yet, let the whites wait at the soft-peak stage before whipping them into firm peaks as the syrup approaches the desired temperature.
Once the sugar syrup has reached 242ºF and the egg whites are whipped to firm peaks, run the mixer at medium-high speed and begin slowly pouring the syrup down the inside of the bowl (try to keep the sryup from hitting the whisk attachment).
Continue whipping until the frosting becomes thick and holds stiff peaks, about 5 minutes. Add the vanilla and whip to combine.
This frosting should be used immediately.

Frost your cupcakes with the marshmallow frosting and brown it with a small kitchen torch. Store in the refrigerator. 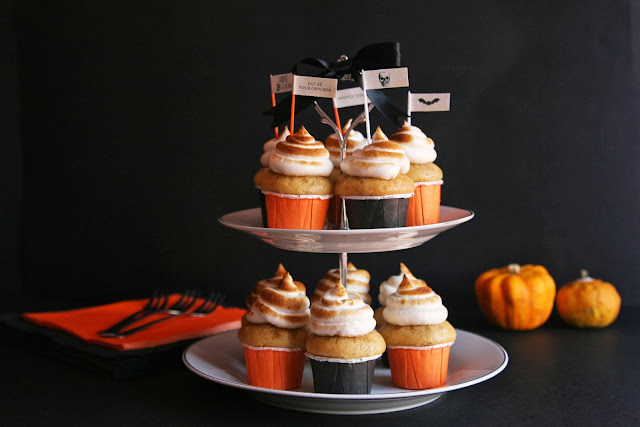 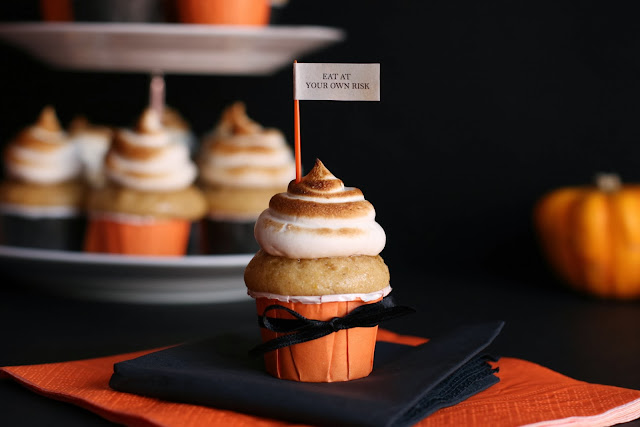 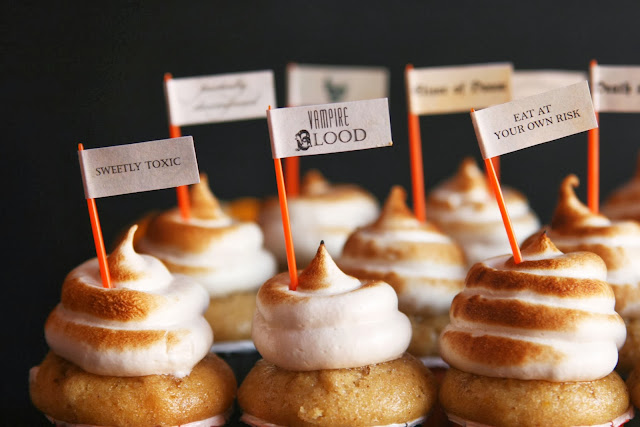 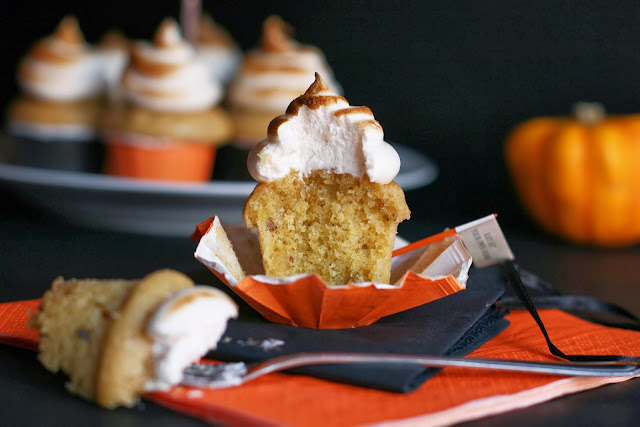 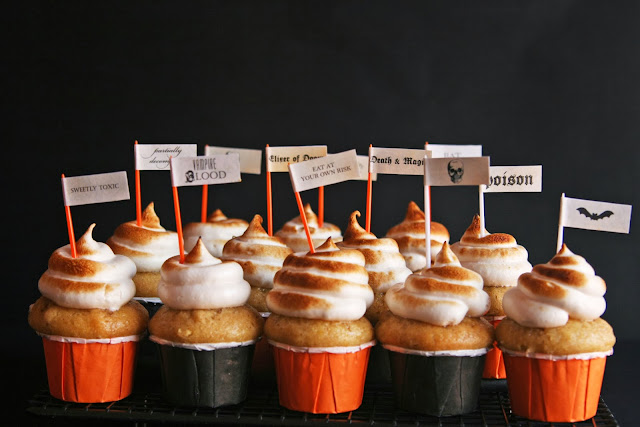 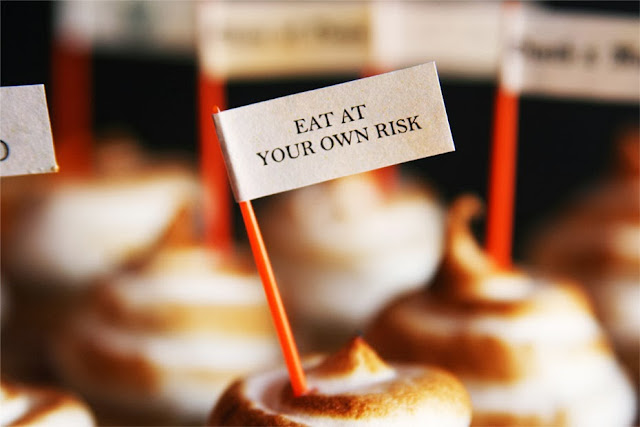